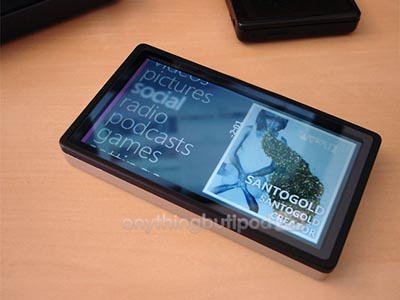 Whether the guys in Redmond are willing to admit it or not, it’s undeniable that the Microsoft Zune line of portable media players borrows a fair bit of its inspiration from the Apple iPod line from Cupertino. It started out with the first Zune that was akin to the current iPod classic. It expanded to include the Zune Pad (like a click wheel) and the Flash Zunes (like the iPod nano). This is the next natural progression.

Seeing how touchscreens appear to be all the rage these days, it would only make sense for Microsoft to capitalize with the release of a Microsoft Zune Touch, like the player shown here. As you can probably imagine, the Zune Touch would be competing directly against the iPod touch.

Also as you can probably imagine, no specific specs or features have been revealed about this currently reclusive device, so we’re just going on our wits and gut instincts for now. It’ll have a larger touchscreen display, a complete lack of buttons, and a modified Zune interface that likely includes an accelerometer for auto-rotation.

Naturally, Microsoft has not officially confirmed (or denied) the existence of a Zune Touch, but it could be a step in the right direction if it is able to offer some advantages over the offering from Steve Jobs and Apple. Maybe I’ll be lucky enough to spot something at CES next week.