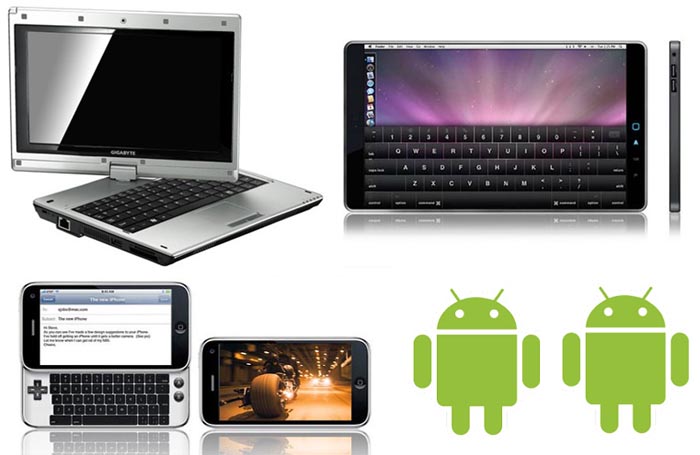 As we all get ready to say goodbye to 2008, we also get to look forward to 2009 and what the mobile technology industry will have to offer us. What new toys should we be expecting? What innovations will find their way into our living rooms and into our pockets? I’m no Nostradamus, but looking to my crystal ball, I foresee the following.

One of the most important features still missing from the Apple iPhone, aside from copy-and-paste, is a physical QWERTY keyboard. There is a very good likelihood that we will be seeing some variation of the iPhone Pro and iPhone Elite in 2009. Apple has released a new iPhone every year for two years. Let’s make it a trifecta, this time with QWERTY.

While other platforms have tried hard to capture the enterprise and corporate markets, Research in Motion is still the preferred provider for most companies. As RIM further expands its BlackBerry line, I feel that it will do just fine approaching both the consumer side (Pearl, Storm, etc.) and the enterprise side (Bold, Javelin, etc.).

Netbooks that take on the convertible tablet PC form factor are nothing new. I saw the offering from Gigabyte at Computex in June. However, seeing how something as affordable as the Intel Classmate PC can do the convertible tablet thing now, it would only make sense to see similar functionality coming to new netbooks from Acer, Asus, MSI, HP, and other major players.

The leaked roadmap makes mention of a BlackBerry Bold with a touchscreen and I think such a configuration could provide the best of both worlds. I like how the Palm Treo Pro works, for example, but when you add in the robust backend of BlackBerry and all the support that comes with it, a Bold Touch could be a huge seller. Navigating through the web will be a lot easier with a touchscreen.

5. Touching a Mac Tablet for Real

Apple has been toying with the idea of a tablet for a very long time, but it may finally come to fruition in the form of a giant iPod touch. Apple would do very well for itself competing in the netbook/UMPC market, just as it has with the portable media player and notebook markets. A 7-inch tablet could slot in perfectly to fill that void in between these two extremes.

For now, the T-Mobile G1 is the only smartphone powered by Google Android, but additional Android phones should start flooding the market in 2009. While I certainly appreciate the open source nature and the massive can of worms that it may offer, I don’t think that Android will achieve the same status as the iPhone. It may be able to get a similar market share as something like Windows Mobile, but not much more than that. This is partly because while people flock to the Altar of Steve for all things Apple, there aren’t as many Google evangelists.

Further still, people are familiar with Google as an online “software” entity and not one for hardware. Microsoft suffers the same fate with the Zune. We may use Windows and Office, but Microsoft hardware is not as popular. The same can be said about Google hardware, even if they’re not really the ones manufacturing the smartphone.

Flash memory is getting cheaper and more people are starting to recognize its benefits. You get better battery life, lower heat, and fewer moving parts. The two things holding solid state disks back from overcoming the conventional hard disk drive are price and capacity. Innovation will slowly work to overcome these hurdles for netbooks and other mobile devices.

The New Fido is supposed to be super affordable, catering to the cheaper end of the market with no system access fee, free phones, and plans starting at $15 a month. While el cheapo compatriot Koodo is lacking in the BlackBerry department, both Solo Mobile and Virgin Mobile Canada have the ‘Berry. The dog should follow.

The leaked Rogers and Fido roadmap for 2009 is pointing toward BlackBerry support for the dog, including the Pearl, Pearl Flip, and Javelin. Expect plans to mirror those of Virgin with a little Rogers flair.

9. A Greater Shift to Affordability

The economic storm is making it harder than ever to be profitable in any kind of business. I fully expect all companies across the board to start shifting their attention to the lower end of the market in an effort to sell anything at all. Fido has already done this, but we could be looking at more BlackBerry Pearls, for example, as well as other cheaper alternatives to the most highly sought after devices. Will this result in an iPhone nano? Time will tell.