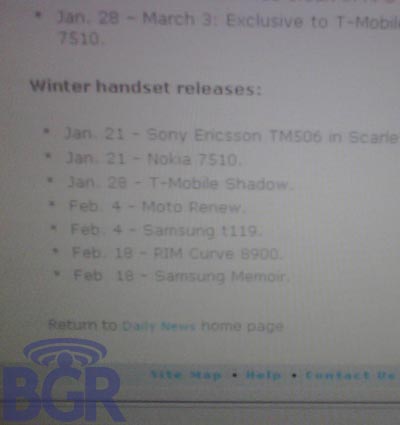 In addition to having the only Google Android phone on the market (for now), it seems that T-Mobile USA has at least a few more tricks up its sleeve for the next couple of months. Perhaps the most notable mention is the pending launch of the BlackBerry Curve 8900, which you may have known previously as the BlackBerry Javelin or BlackBerry Bold Lite.

One of those crazy insider ninjas managed to provided this snapshot of the T-Mobile upcoming release schedule for January and February of next year. These slides are usually provided to distributors and other people inside the T-Mobile fold so that they can better anticipate any questions that customers may have and so on.

If you find the slide a little difficult to read, it tells us that the Sony Ericsson TM506 in Scarlett and the Nokia 7510 launch on January 21, the T-Mobile Shadow (II?) comes out on January 28, and the Motorola Renew and Samsung t119 release on February 4th. The date that you’ll want to circle on your calendar, though, is February 18. That’s the day that will see the BlackBerry Curve 8900 and the Samsung Memoir.

As you may recall, the Memoir is that crazy 8-megapixel touchscreen phone from Samsung that’ll have all the touchy shutterbugs swooning. If you don’t absolutely need 3G, the Javelin (Curve 8900) is a very nice bet. It’s much more pocket-friendly than the Bold.