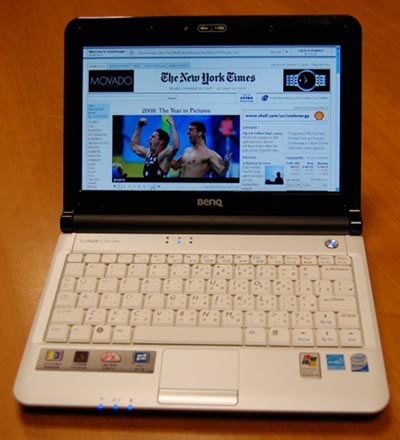 It’s obvious enough that the netbook market is absolutely booming with interest, but most people are turning to familiar names like Asus, Acer, and Dell for their little laptop needs. A name that is well-respected in its home Taiwan but not as popular outside of that island is BenQ and they’ve got a netbook to share as well.

The lucky ducks at Laptop Magazine had the opportunity to take the BenQ Joybook out for a test drive and they found it to stand up quite well against the competition but, at the same time, there isn’t much that sets it apart from the crowd either. In terms of features, you get a 10-inch display, 160GB hard drive, Windows XP, and 1.5GB of RAM. That’s half a gig more than most netbooks. You’ll also find a full build of Office 2003 under the hood for all your word processing, databasing, and spreadsheeting needs.

While other 10-inch netbooks have a fairly workable keyboard, Laptop Magazine found that the one on the BenQ Joybook was “a bit disappointing” as it doesn’t stretch all the way across the width of the netbook. The right shift key is too small, as is the trackpad. The trackpad button is also quite loud.

Going back to the display, you actually get a 10.2-inch screen with a true 16:9 aspect ratio, rather than the 16:10 that you find on other netbooks. This will involve a hair more vertical scrolling compared to the others. In the end, they’re happy that the Joybook is easy to upgrade and it’s priced fairly at $550 in Taiwan.