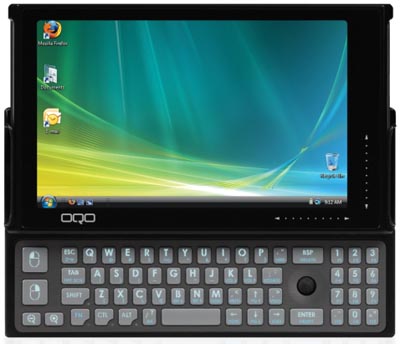 With the rapidly increasing interest in netbooks among the general populace, the UMPC form factor is slowly getting pushed aside and ignored. That’s a shame, really, because UMPCs possibly provide better portability and power compared to their netbook counterparts. In an effort to revitalize some interest in UMPCs, OQO’s got a new one for CES next month.

It’s now been revealed that the OQO Model 02+ UMPC will be making its official debut at the Consumer Electronics Show in Las Vegas next week, possibly at the Pepcom Digital Experience event that kicks off the weekend of technological greatness. We’ve seen OQO UMPCs in the past, so how does the Model 02+ set itself apart.

For starters, the handheld device has been outfitted with an OLED display, offering greater brightness and more vivid color reproduction. Other upgrades include a touchscreen interface, a slightly redesigned slide-out keyboard, worldwide 3G connectivity, and a 1.86GHz Intel Atom processor.

The rest of the details, like a launch date and pricing information, have yet to be released by the guys at OQO may have more for us as we get closer to CES in Las Vegas. Representatives are saying that the OQO Model 02+ will be twice as fast as the old Model 02. That little + symbol makes all the difference.