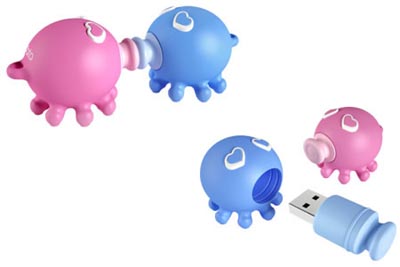 I would say that most people regard the USB flash drive market with very little interest. They’re just little sticks of memory that come in handy for shifting your files from one computer to another. Sure, some may come with advanced security measures or incredibly impressive capacities, but they’re all quite similar right?

Some manufacturers try really hard to differentiate their products from the rest of their competition by implementing a series of innovative features or improved data transfer speeds. A-Data does that too, but not with the current offering. Instead of appealing to the geek crowd with fast data transfers and advanced encryption, A-Data has the T806 Kissing Octopus Couple Flash Drive.

We’ve already seen flash drives shaped like sushi and humping dogs, so why not a pair of kissing cartoon octopuses (octopi?) too? You have to admit they’re pretty cute. In fact, the blue and pink pair have already won the iF 2009 Design Award.

I haven’t seen any mention of pricing, but I do hear that the A-Data T806 Kissing Octopus Couple Flash Drive is available in 2GB, 4GB, and 8GB varieties. Perhaps you should start shopping for an early Valentine’s Day gift for your geeky sweetheart?