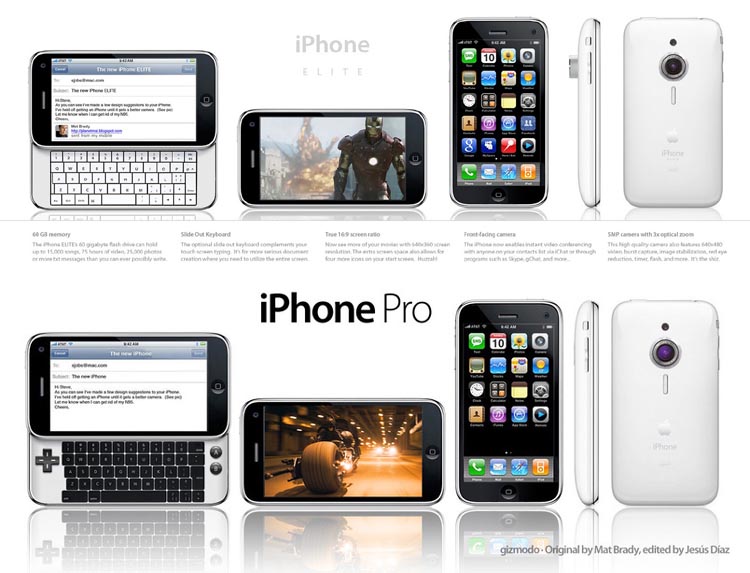 Last Friday, I took a look at the future of the iPhone and reiterated how Apple would be able to benefit from expanding the iPhone lineup by offering something like the iPhone nano. A smaller, less expensive variant that would more easily fit into a pocket would appeal to people who want a phone that is a little more compact while still offering all of that wonderful Cupertino-fueled jazz that has everyone ranting and raving. What I failed to mention, in some way, is for Steve Jobs and the rest of the team at Apple to take the iPhone in the opposite direction as well.

As robust and powerful as the Apple iPhone 3G may be already, there is one department where it is still seriously lacking: a physical QWERTY keyboard. That may soon be changing if a couple of concepts actually come to fruition.

One of the big reasons why certain business people and other text-happy enthusiasts are hesitant to jump on board the iPhone bandwagon is the lack of a physical keyboard. The virtual QWERTY on the touchscreen is alright, I suppose, but for people who send a lot of emails or compose longer documents, it just doesn’t cut the mustard when compared to something like a BlackBerry Curve, a Palm Treo Pro, or an HTC Touch Pro. Those are built for messaging, as evidenced by their QWERTY keyboards.

Even looking over at Nokia, a large cell phone company that only recently entered the touchscreen arena, we are already seeing the beginnings of devices like the Nokia N97. This Symbian smartphone has a large touchscreen, but it also slides out with some angled QWERTY, not unlike the AT&T Tilt. Nokia recognizes the importance of a physical keyboard, following up on the keyboard-less Nokia XpressMusic 5800 “Tube”. Apple should do the same with the iPhone line.

The existing progression from the first iPhone to the current iPhone 3G would follow the same trends as devices like the HTC Touch Diamond, Nokia Tube, Samsung Instinct, and other consumer-oriented touchscreen devices. A sister line with physical QWERTY keyboards could then better approach the corporate, enterprise, or business side of things where people fire off more emails and have a greater reliance on quick text-based communication.

Following this line of thought, Mats Brady came up with what he calls the iPhone Elite. It is essentially the same idea as the current iPhone, except it has a slide out QWERTY keyboard. Based on raw appearances, you could almost say that it looks like a smaller Nokia N810 Internet Tablet.

Just like the relationship between the HTC Touch Diamond and the HTC Touch Pro, the two devices could easily co-exist to appeal to different segments of the market. Mats isn’t the only one who likes this idea.

Jesus Diaz of Gizmodo refined Brady’s iPhone Elite to form what he calls the iPhone Pro. It’s still a “regular” iPhone with a slide-out QWERTY keyboard tacked on, but there are a few minor changes that make it even better.

The keyboard has been switched out to look more like the one on the current MacBook, furthering the branding strategy for Apple. To compete against the Nintendo DS, the keyboard has also been altered to include a directional pad and a couple of gaming buttons. This way, the iPhone (Pro) could slide in there against the DS Lite and the PSP. Gamers like physical buttons too.

Will we be seeing some variation of the Apple iPhone Elite or Apple iPhone Pro at the upcoming MacWorld? It’s probably unlikely at this point, but Steve Jobs has pulled more rabbits out of hats than we care to count. Even if it doesn’t happen at MacWorld, I think that we will be seeing a QWERTY-equipped iPhone sooner or later.