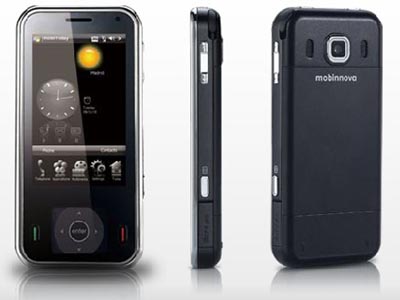 The Mobinnova ICE acts as the flagship smartphone for the lesser-known company and based on what we can see, the prospects could be reasonably positive. Powered by Windows Mobile 6.1, it’ll keep you fully connected through GSM, WCDMA, and HSDPA.

You’ll also notice that it lacks a physical keyboard and doesn’t have much in terms of physical buttons at all. Instead, it’s got a large 3″ WQVGA touchscreen with mobiFeel tactile feedback, as well as a touch-sensitive area below that where you would normally find a five-way navigator.

Among the innovative touch sensitive controls are mobiToday and mobiShift, functioning in a similar way as HTC TouchFLO 3D, Asus Glide, and Samsung TouchWiz. The rest of the specs include a 3.0 megapixel autofocus camera, Microsoft Exchange support, WiFi, RDS FM radio, Bluetooth 2.0 with A2DP, GPS, Qualcomm MSM7201ATM chipset, and a 1080mAh battery.