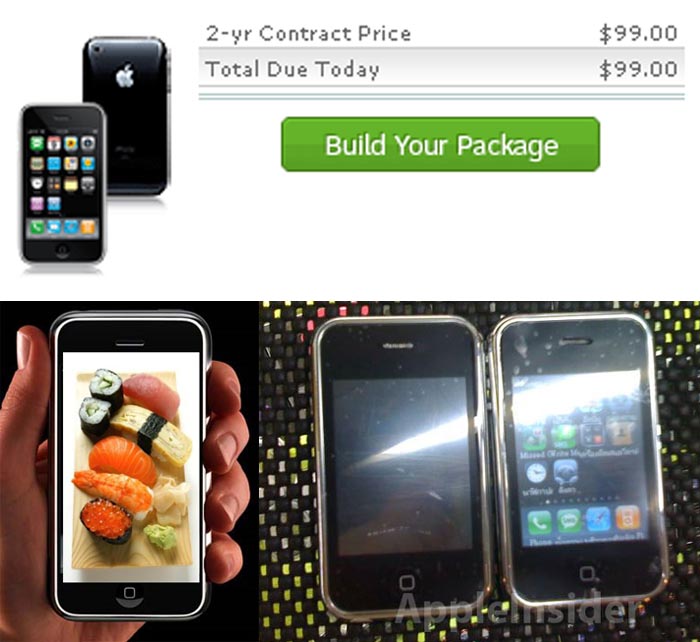 The first Apple iPhone was launched last year and everyone got all excited over the first mobile phone from Apple. The iPhone 3G launched earlier this year and introduced us to the App Store and a much faster data connection. Looking toward 2009, what else can we expect from the next generation Apple iPhone? What better way to predict the future than to look at the present.

First, I fully expect the developer community to continue to expand the functionality of the iPhone platform. By allowing just about anyone to create interesting applications and by making it easy to distribute said applications, Apple really is fostering a way for us to make the iPhone do what we want it to do.

Yes, there are all sorts of exceptions and applications are pulled all the time for breaking certain rules, but there are also a lot of great apps that make it through too. We can calculate tips, go go-kart racing, and simulate bodily functions. Following this, we’ve also got apps that identify sushi for the uninitiated too. A company better known for manga has an illustrated sushi encyclopedia for the iPhone for $5.

What other applications can we expect? I’d imagine that the App Store will continue to get random offerings that come with no real useful purpose, but those seem to be among the best-sellers. You can’t blame developers for trying to make some money. So long as some useful apps filter in among the less useful diversions, I think everyone will be happy. It’s just like the podcast directory in iTunes. Some good stuff, some mindless drivel, and some interesting diversions.

Second, I anticipate that more affordable iPhones will avail themselves to the public. There are a number of ways that Apple can achieve this, further expanding the user base of iPhone owners. One of the strategies is to sell refurbished iPhones at a reduced price. They already do this with iPods, iMacs, MacBooks, and just about anything else, so why not the iPhone too?

While it’s not quite the same thing as the $99 iPhone that we were supposed to get from Wal-Mart, AT&T has started selling refurbished 8GB iPhone 3G handsets for a mere $99. It comes in black, of course, and you’ll still need to latch onto a two-year contract with AT&T to get it. If you want to step up to a 16GB model, you can do that (in black or white) for $199, also refurbished.

From what I hear, you can almost expect to get better overall quality with refurbished, because the quality assurance people take two passes at refurbs to make sure they’re good to go (and as good as new), whereas brand new products only get one pass through the QA team. Go figure.

Third, we have every reason to believe that the iPhone lineup will expand in much the same way as the iPod and MacBook lines. They may have started out quite singularly, but that changed as we wanted to get a little more variety. Could we see both more expensive and less expensive variations? Quite possibly.

In fact, the iPhone nano is already on sale in Thailand. Well, that’s not completely true. It’s a random knockoff by some shady company, but there’s no reason to believe that Apple can’t make a real iPhone that’s smaller, more pocket-friendly, and cheaper.

Moving forward, we could look at everything from a smaller iPhone (iPhone nano), an iPhone slider, an iPhone clamshell, an iPhone superphone, or any number of other iterations. I just hope Apple never makes an iPhone shuffle. Dialing random numbers would not be a good idea.