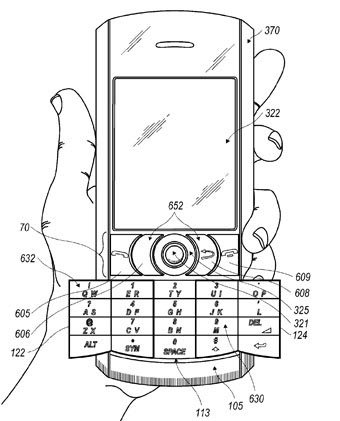 Research in Motion, like any other innovative company, is always busy filing new patents for new ideas, but this patent has to be one of the strangest I’ve seen in a while. I’m not really sure who would want a phone quite like this, but it speaks to what a new BlackBerry may look like some time in the future.

You see, one of the reasons why some people don’t want a BlackBerry is because they prefer a conventional numeric keypad. At the same time, they want the fuller keyboard for ease of mobile emails and text messages. This fold-out “wing” style keyboard tries to address both of these needs.

According to the provided patent sketches, the phone will look mostly like the existing BlackBerry Pearl in its closed position, except the keypad will be of the standard numeric/T9 variety. However, this can flip out like a pair of wings to reveal a full SureType keyboard.

I’m not exactly sure how sturdy those wings would be, but my bigger query is why RIM wouldn’t flip out a full QWERTY keyboard rather than a large SureType keyboard. You might as well, right?