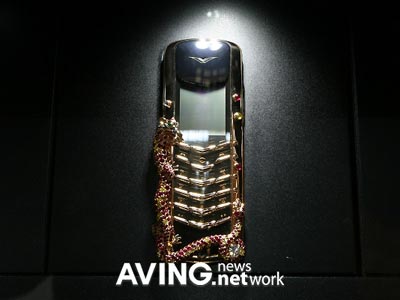 Recession? What recession? Some people don’t seem to be nearly as affected by the economic downturns in the financial markets as some other people, so they have no trouble dropping thousands of dollars on new watches and jewelry. Super exclusive and expensive cell phones fall under this category as well and one of the first names that comes to mind when it comes to expensive cell phones is Vertu.

Hopping on over to the Vertu Store in Wynn Las Vegas, you can find the Vertu Signature Dragon. It looks like every other candybar-style phone from Vertu, but it could also be the world’s most expensive mobile phone. The technical specifications have not been announced, but you are not breaking the bank to get your hands on a higher resolution camera or a better set of technical features. The Vertu Signature Dragon is all about the bling.

As you can see from the picture provided, the phone is all wrapped in a jewel-encrusted reptilian beast. I’d imagine that all of those sharp edges won’t be very comfortable against your face, but that’s the price you pay for over the top Vegas-style blingery.

How much does this phone cost? We’re not sure, but if you cringe at the price tags of other Vertu handsets, I’m thinking that the Signature Dragon will be no exception. I’ll see if I have time to pop by the Vertu store when I’m in Vegas next month for CES.