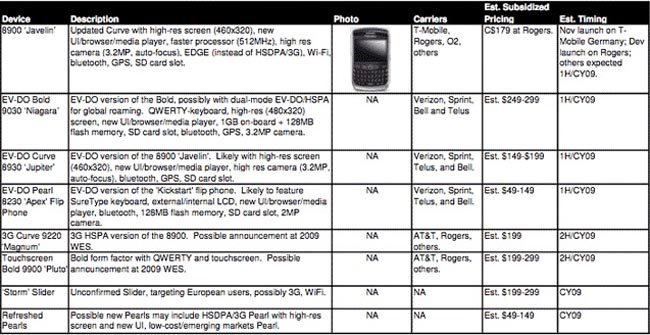 It looks like Research in Motion is going to keep itself pretty busy next year, because this leaked roadmap for 2009 is pointing toward a few notable launches of new BlackBerry devices.

I’m not sure how much credence can be placed with a random TmoNews forum member named Godzilla, but much of this falls into line of what we want and what we’re expecting. For example, it’s looking toward the Curve 8900 “Javelin” with Rogers, O2, T-Mobile and others.

Going a little further down the list, perhaps the two most notable mentions are that of a Touchscreen Bold 9900 “Pluto” and a Storm Slider. The touchscreen Bold will take on much the same form factor as the existing Bold 9000, except the display will be a touchscreen. We’re expecting an announcement at 2009 WES with launches at AT&T and Rogers for about $199 to $299 with contract.

The Storm Slider falls in line with products like the HTC Touch Pro. The BlackBerry Storm is the first touchscreen BlackBerry from RIM, but some people will still want a physical QWERTY keyboard. This is unconfirmed at this point, but we expect 3G, WiFi, and a Euro-centered release.