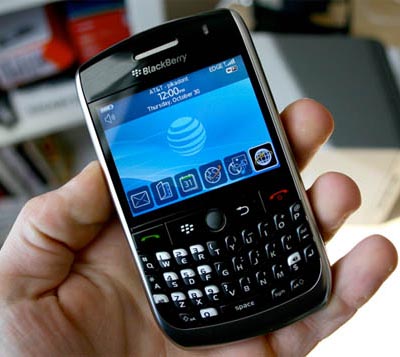 While the picture shown here is of an AT&T-branded BlackBerry Curve 8900, it seems that T-Mobile may be getting that new QWERTY-fied smartphone very soon as well. More specifically, current reports are pointing toward a February 18th launch of the Curve 8900 with T-Mobile.

Formerly known by its Javelin codename, the BlackBerry Curve 8900 has also been called the BlackBerry Bold Lite by some people. The overall styling is very similar, but the Curve 8900 is a fair bit smaller and, as a result, friendlier for smaller pockets.

We’ll chalk this one up as an unsubstantiated rumor for now, but it’s not that big of a stretch to see the 8900 make the jump from AT&T to T-Mobile. There is no 3G radio found inside, so Research in Motion doesn’t even need to change any of the core components.

If you’re really itching to get your hands on some Javelin action, you can hop across the border into Canada where Rogers Wireless is already selling this latest QWERTY-equipped BlackBerry. That’s right. Canada gets it first.