Seeing how there is already a range of Sony VAIO laptops available with 11-inch and 12-inch screens, you would think that the fashionable company would come up with something to compete in the netbook market as well. Up until now, we’ve seen offerings from nearly every other major computer maker, including HP and Dell, so where is Sony in this mix?

As it turns out, Sony may indeed be working on a VAIO-branded netbook of its own, if the Sony Japan website is to be believed. The Japanese website for Sony has a teaser picture currently erected, pointing toward a “VAIO New Mobile” at some point in the very near future.

The teaser involves a woman wearing an evening gown, pulling out a thick envelope in her purse that resembles a small laptop. In fact, it looks just like the WWAN-enabled netbook from Sony that passed through the FCC a short while ago. Based on the relative proportions of the image provided, it’s safe to say that we could be expecting an 8.9-inch or 10-inch Sony VAIO netbook soon.

There is an area for you to sign up for updates on this new VAIO as they become available, presumably with the emails being sent out in Japanese. Over on the New Zealand Sony website, there is also a section saying that “the wait is over” for a new VAIO and it’ll come on January 9th. Stay tuned. 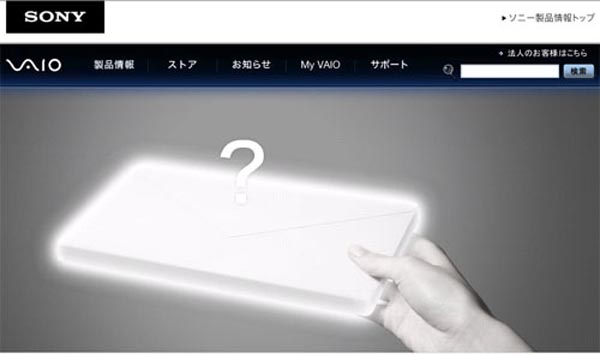