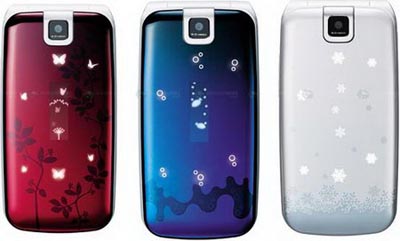 For some guys, you can give them a phone with a near-industrial design and they’ll be perfectly happy so long as it is functional. For other guys, they prefer the stylish appearance of the iPhone or a slick Samsung slider. There is a range to consider there. Why is it, then, that when electronics makers make something catering to women, it is inevitably about as girly-girl as it gets. At least this one isn’t offered in pink… yet.

Catering to the “young female consumer” market is the new LG SH490 fashion phone. To further the girly-girl tendencies of this handset, LG is called it a “make-up phone.” Given that name, I thought that it would come with a larger mirror so that the ladies could touch up on their foundation, but that does not appear to be the case.

Instead, the LG SH490 looks almost like any other fashionable clamshell. It’s not boring, since the outside will be dressed up with some fancy designs, but I’m not really sure where the “make-up” part of the name comes into play.

On the techie side of things, the SH490 clamshell gets a 2.4-inch internal QVGA display, 1.1-inch external display hidden beneath the plastic, 3 megapixel camera, Bluetooth, media playback, 512MB internal memory, and microSD expansion.

No word on price or availability, but we are told that the LG SH490 will launch in Smoky Red, Deep Blue, and Pearl White. Where’s Powder Pink?