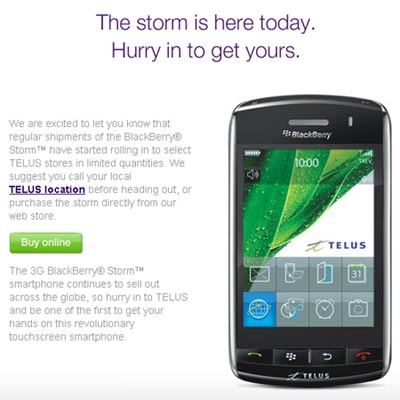 Hurry! Hurry! Hurry! Step right up to your closest Telus kiosk and sign your life away as soon as you can, because Telus stores have just restocked on the BlackBerry Storm. The wildly popular touchscreen smartphone from Research in Motion has literally been flying off the shelves, so Telus has had a hard time keeping up with demand.

Including today, there are only two real shopping days left until Christmas, so if you plan on giving some touchy ‘Berry love to the mobile enthusiast in your life, you should be advised to act quickly. Just like the Nintendo Wii and Wii Fit, I don’t think Telus will be able to keep the shelves stocked with the Storm for long.

Telus is selling the BlackBerry Storm for $249.99 with a qualifying three-year contract. If the Telus store in your area hasn’t been replenished with some Storm action, we hear that Bell has gone through to refill on Storm stock as well. Just like Telus, you’ll need a three-year contract to get the attractive price at Bell too.