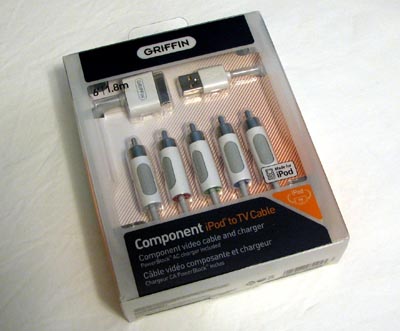 With the noted exception of the iPod shuffle, the entire line of iPod portable media players is capable of playing video files. This makes it very convenient to keep up with your favorite television shows, video podcasts, and even feature-length movies if you’re alright with squinting your eyes. That’s all well and good, but what about when you’re at home and you want to watch that video content on a bigger screen? Just as we’ve come to rely on our iPods for our music content, the same may soon be said about video, thanks to products like the Griffin A/V cables for iPod.

Shopping around on the market, you’ll find a huge variety of iPod speaker docks. These are designed to take the tunes stored on your iPod and blast them through a medium that’s a little less personal and a little more public. You can ditch the headphones in favor of some speakers. In like fashion, the newly added A/V cables from Griffin do the same thing with iPod-sourced video content.

Does this sound familiar? It should. Apple has been selling its own set of iPod A/V cables for some time now, so how are the cables from Griffin any different? Realistically, they’re not. They even have the same iPod-inspired white paint job.

The Griffin A/V cables for iPod are available in composite and component form, depending on how you’d like to connect your iPod to your television. The ones being reviewed here today are of the component variety, but the composite set is effectively the same.

In terms of what is included in the package, I was actually quite pleased to see that the cable also includes a USB connection. No, this isn’t so that you can sync your iPod while watching videos on your TV. Instead, the USB connection is used in tandem with the bundled Powerblock AC adapter. This way, the battery on your iPod is continually charged while you watch your television shows and Hollywood movies. The PowerBlock is worth about $20 on its own, so that’s a nice bonus. And yes, you can use the PowerBlock with other USB-charging devices as well.

The RCA connectors on the cable are clearly color-coded, so messing up the connections is really inexcusable. The only exception would be the two red cables: one as part of the RGB component video and the other as part of the stereo audio. How did Griffin overcome this conundrum?

While the connection to the iPod appears to be a single cable, it actually splits into three separate set of clearly labeled cables. There’s one that leads to the USB connection, another batch that leads to the stereo audio connection (red/white), and another batch for the component video (red/green/blue). There will still be a little bit of tangle and confusion, but this kind of separation certainly helps.

Other noted features include shielded copper cores to reduce line noise, heavy-duty PVC cable jackets, and a “generous” six feet of length. The build quality really does seem quite good and the cables don’t have that “cheap third party” feel to them at all.

The same can be said about the audio and video quality. Don’t expect this to replace any kind of true HD set-top box or streaming content from a PS3, but the video is remarkably watchable… even lower-resolution video podcasts. On the downside, the video output only works when you are actually playing a video. The iPod menu does not get displayed on your TV. Further still, audio does not output to your Tv if you are listening to music either. Audio only works in conjunction with video. That’s too bad.

Is there any reason why you would opt for the Griffin A/V cables for iPod over the official Apple ones? I’m not sure. There does not appear to be any advantage in terms of functionality or performance, nor is there is a pricing advantage as both cost $49.99.

I can’t fault Griffin in the quality or performance departments, but the accessory specialist would have capitalized on a few more sales if its A/V cable solution was only $10 or $15 cheaper.