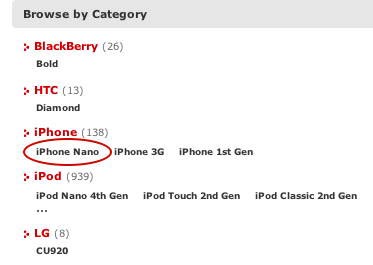 Last week, I reminded you (and Apple) that an iPhone nano would be a very good idea, because it would provide a more affordable entry point for people who want in on the iPhone action. It seems that I’m not the only one who thinks this way, because there is now a little more confirmation pointing toward an iPhone nano launch in 2009.

Remember the Let’s Rock Event from Apple earlier this year? Before Steve Jobs took the stage, some leaked aftermarket cases for the fourth-generation iPod nano were thrown around on the Internet, pointing toward what the new iPod would look like. It’s deja vu this time around, because a case-maker is already indicating that it will make some protective stuff for an iPhone nano.

XSKN is a company that produces cases for a variety of cell phones and in the screenshot that you can see here, there is an option to choose the iPhone Nano. Could this be little more than a simple typo or is there more to it than that? Could XSKN already be designing (and building) cases for a phone that does not officially exist yet?

It’s a bit of a stretch to go on such a brief mention, but it is a little more evidence pointing toward the possible development and pending launch of an iPhone nano. We also have to wonder what the iPhone nano would look like. A smaller bar? A slider? Flip?