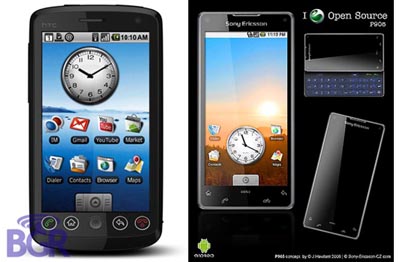 First, we’ve spotted a Sony Ericsson P905 Android phone concept. Shown to the right, this concept phone takes on a form factor that is similar to the LG Prada II, featuring a large touchscreen display and a slide-out QWERTY keyboard.

Sony Ericsson isn’t the only one joining the Google party, because the Garmin Android Phone is being scheduled for the second half of 2009 as well. Will this be a variant on the nuvifone or a new handset altogether? Time will tell.

Sticking to conventional naming conventions, we caught a glimpse of what the T-Mobile G2 may look like. Still built and designed by HTC, the T-Mobile G2 looks quite different than the T-Mobile G1. There’s no physical keyboard, a larger touchscreen, and redesigned hard buttons. The trackball remains intact.

If there’s no physical keyboard, how are you supposed to type? Google Android doesn’t currently have a virtual keyboard, after all. Well, it will. Below is a video of the Android on-screen keyboard. Nothing too out of the ordinary in terms of virtual keyboards, but it’s good to see how it’ll look.