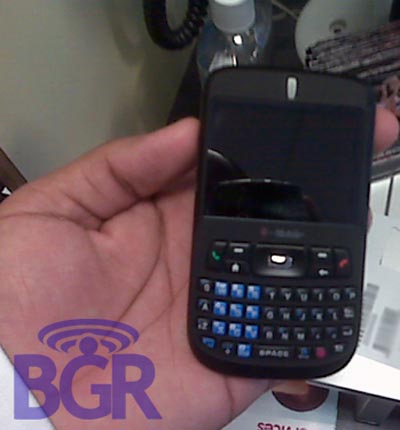 It wasn’t all that long ago that phones like this would only appeal to people in the corporate environment, but QWERTY smartphones are quickly rising in popularity among the general populace as well. Do you need a new mobile email wizard and it’s got to be all dressed up in black? HTC and T-Mobile may have just the ticket.

No, I’m not talking about a black T-Mobile G1. Spotted here is what appears to the T-Mobile Dash 2 Windows Mobile smartphone all wrapped up in a beautiful black paint job. Interestingly, you’ll noticed that some of the keys on this phone are highlighted in blue, presumably to make it easier to dial out for voice calls.

Aside from some of the more rugged iDEN handsets out there, I very rarely use the term “sporty” to describe a phone, but the black T-Mobile Dash 2 does look sporty. Despite it somewhat business-esque inclinations, it would also complement your black tracksuit just fine as well. I’m digging the black.

From what we know, the Dash 2 gets preloaded with Windows Mobile 6 and rocks Wi-Fi for its high-speed data needs. We can’t say for sure, but it’s also possible that T-Mobile compatible 3G connectivity has also been thrown into the mix. That’s possible, but somehow I think it’s unlikely.