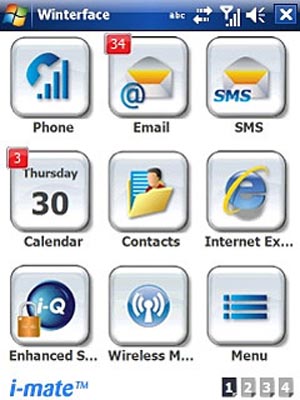 As robust and widely used as Windows Mobile may be, many people are not happy with the clunky user interface. Joining several other cellular manufacturers, i-mate is set to offer a new skin for its Windows Mobile phones, potentially making the OS more attractive and user-friendly.

This follows in the trend that is currently being pushed by HTC TouchFLO 3D, Sony Ericsson Xperia Panels, Samsung TouchWiz, and Asus Glide. All of these run on the Windows Mobile architecture, but offer a wholly different smartphone experience for users. It’s meant to make Windows Mobile “easier to use for the average user.”

The Windows Mobile skin or UI app coming from i-mate is being called i-mate Go. It will be based on the VITO Winterface and takes on a very icon-based appearance. If it weren’t for the Windows bar at the top of the screen, you would think that it looks almost like the Apple iPhone, albeit not quite as sleek. Even the individual icons have rounded corners, just like the iPhone.

New devices coming off the i-mate line will feature the new i-mate Go user interface right out of the box. For existing owners of the Ultimate 9502, Ultimate 8502, Ultimate 8150, Ultimate 6150, and JAMA 101, they can head on over to the i-mate website to grab the new firmware.