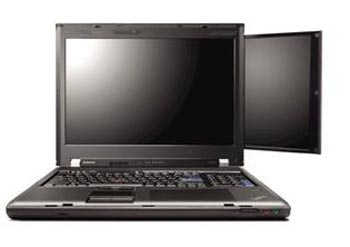 While at home with your desktop computer, you may be enjoying a dual monitor configuration. Hopping on over to your laptop, it can be quite disorienting to be restricted to a single screen. Wouldn’t it be nice to have two screens on your notebook too? IBM thinks so, and that’s why it has created this monstrosity known as the IBM ThinkPad W700.

No, this is not a bad PhotoShop job done by some fanboy run amok. This is a real deal and it’s got to be one of the craziest laptop designs that I have ever seen. In addition to the main 17-inch display, the IBM ThinkPad W700 has second 10.6-inch display that folds out to give you some extra space for instant messengers and other secondary applications.

The secondary display is vertically oriented, boasting a resolution of 768×1280 and it is LED backlit for your pleasure. The main 19-incher is also LED backlit, rocking an impressive 1920×1200 resolution. That’s a lot of real estate for a laptop, but it also means that this is far from being the most portable notebook on the market.

Be prepared to pay quite the pretty penny for this. You’ll also want a larger laptop bag if you plan on doing any traveling at all. Like a luggage-size laptop bag.

UPDATE: I thought it was a bit curious to see an IBM ThinkPad, considering that Lenovo bought the computer-making business from IBM a few years ago. In this way, this is probably going to be called the Lenovo ThinkPad W700 and not the IBM ThinkPad W700. Thanks James for the reminder.