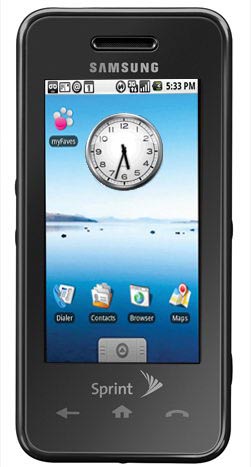 The HTC-sourced T-Mobile G1 currently enjoys a monopoly on the Android smartphone market, but that’s quickly changing. In fact, Samsung is joining in on the Google fun by issuing an Android-powered smartphone to Sprint and T-Mobile some time next year.

Nothing has been 100% confirmed just yet, of course, but word is that Samsung is hard at work producing an Android-powered smartphone and it may even be on display at Mobile World Congress in Barcelona next year. If I’m lucky, they may have an early prototype in Las Vegas for CES next month, but that’s probably pretty unlikely.

As it stands, the yet-unnamed Samsung Android phone will be based largely on the Samsung Instinct and the Samsung Omnia, meaning that it will likely lack the physical QWERTY keyboard found on the T-Mobile G1. This seems to be the trend for Android phones, as some of the other Android phones in development from other firms are taking this iPhone-like approach as well.

Seeing how Samsung is already familiar with mobile widgets thanks to the TouchWiz user interface on the Omnia and a couple other phones, the transition to Google Android could be a reasonably smooth one. Whether this particular handset turns out to be a hit or not is of secondary concern. I’m just glad to see a wider adoption and embrace of Android.

For now, we hear that the Samsung Google Android Phone will be ready around June of next year for Sprint and T-Mobile. Yes, CDMA can have Android too.

On a related note, there is also a rumor of the T-Mobile G2 getting released on January 26th. How much weight this rumor pulls remains to be seen.