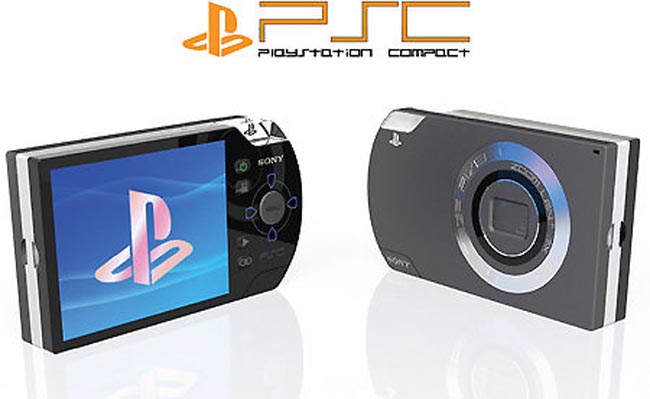 The prospect of a new PlayStation Portable is still up in the air. We were told that Sony’s not working on one only to hear a couple days later that a PSP2 is coming next year. I’ll leave that conjecture up to the rumormongers for now, but we still have to wonder what would the next generation PlayStation Portable look like? How would Sony refresh our interest?

Taking a look at Nintendo’s strategy, they went from the Nintendo DS to the DS Lite, so I guess it would make sense to see a transition from the Sony PlayStation Portable to a smaller PlayStation Compact. Shown here is a completely unofficial rendering of what a PlayStation Compact (PSC) could look like, illustrating the possibility of a smaller Sony handheld gaming machine.

I do appreciate some of the innovations that this new design could bring. The smaller form factor would make the PSC a lot more pocket-friendly than its larger PSP counterpart. The embedded camera in the back could open up some interesting gaming possibilities, as well as expand the multimedia functionality beyond the MP3- and video-playing capabilities that we already find in the PSP. It’ll still have Wi-Fi, of course, so that’s good too.

Unfortunately, I don’t think I’m the only one who thinks such a design is completely unusable. Where’s the directional pad? Where is the analog stick? Many enthusiasts have been begging Sony to bring a second analog stick to the PSP, so why would they remove any sort of directional control altogether? The entire left side of the handheld has been castrated, so you don’t get left trigger buttons either. Looking at the right side, you seem to lose the standard square, triangle, circle, and X too. How are you supposed to play with this thing?