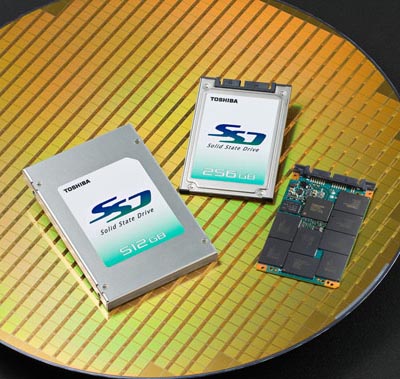 One of the factors that has been holding back a more widespread adoption of solid state drives is the lack of storage capacity. Toshiba is breaking down some of those barriers with one of its latest creations, boosting the maximum storage capacity of 2.5-inch solid state drives to an incredible 512 gigabytes. Can you imagine having 512GB of flash-based memory in your laptop? That really puts the 64GB MacBook Air SSD in its place, wouldn’t you say?

Yes, I know that the MacBook Air uses a 1.8-inch drive so it may be a little while yet before they start producing solid state drives with 512 gigs for that, but we are moving in that general direction. I may be dating myself somewhat, but the hard drive found in my daily Dell notebook only rocks a mere 80GB of space. It suits my needs, but the current standard is much higher than that. And that’s with a spinning platter.

Toshiba hasn’t made any specific indication, but I’m going to fathom a guess that this 512GB SSD will be quite the pricey affair. If you’re looking to rock the solid state-ness from Toshiba but don’t want to spend that kind of money, Toshiba will also have 2.5-inch SSDs in 64GB, 128GB, and 256GB flavors. The 1.8-inch variations will also be offered in the same capacities.

Samples will be made available between January 2009 and March 2009, including display units at the Consumer Electronics Show in Las Vegas. Mass production and eventual implementation into consumer-ready laptops will kick off some time between April and June 2009.