It seems that the BlackBerry Storm won’t be the only highly sought after touchscreen smartphone at Telus this holiday season, because the HTC Touch Pro has been spotted and it could be ready to launch in time for some last minute Christmas shopping.

We had known for some time now that some variation of the HTC Touch Pro would be going to both Telus Mobility and Bell Mobility in Canada, but this is one of the first times that we’ve seen anything remotely official about a launch date. Embedded below is a screen capture from the Best Buy Canada website, showing us that the Telus HTC Touch Pro could be ready to go soon.

There is no image of the phone at this time, but it should be cosmetically identical (aside from Telus branding) to the version found on Sprint in the United States. It’ll also be quite similar to the GSM-ified HTC Fuze from AT&T.

According to this provided shot from the product page, the Telus HTC Touch Pro will be $299.99 with a three-year contract. That said, other reports are pointing toward a $199.99 price point with a three-year. Opting out of a service agreement, the Touch Pro would be $649.99. 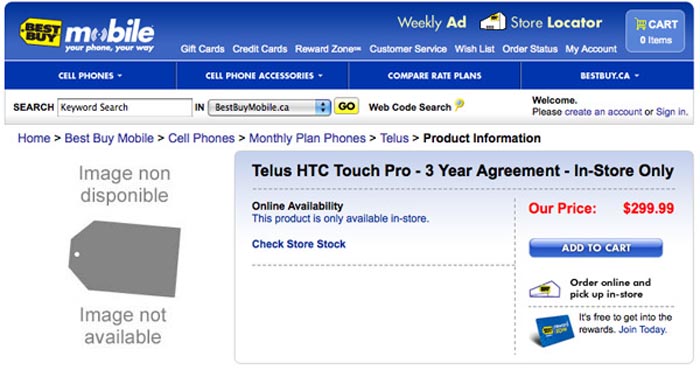