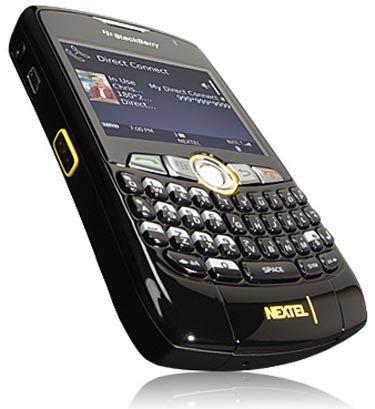 The rumormongers have been following this story for quite some time now, so it’s good to finally see the official release of the BlackBerry Curve 8350i from Sprint-Nextel. Given the Nextel branding, you can probably guess where this is going.

As with so many other iDEN devices that preceded it, the BlackBerry Curve 8350i is designed to be a more rugged affair, easily surviving the toughest of work conditions. Whether you’re sent surveying in the unforgiving climes of a high mountain range or you’re just trying to make your way through an urban construction site, this smartphone will suit you just fine.

Many people are saying that the BlackBerry Curve 8350i is the most advanced Push-to-Talk enabled device to ever be released by Research in Motion. Among the spec sheet are BlackBerry OS 4.6, WiFi, GPS, Bluetooth 2.0, 2 megapixel camera, microSDHC slot, International Direct Connect and Talkgroup, and a 1400 mAh battery. And yes, the shell is made extra rugged to boot.

Hopping on over to the Sprint website, you’ll find the Curve 8350i on sale for $149.99 with a qualifying two-year service agreement. If you prefer to visit a brick-and-mortar location, the tough ‘Berry should be hitting store shelves a little later this week.