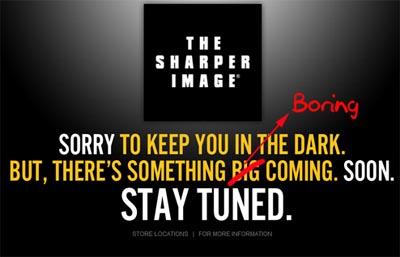 It was one of those cool stores where you would be bombarded with all sorts of useless gadgets. The Sharper Image had some pretty nice toys, so it was with a tear in our eyes that we saw it close its doors. Well, it’s on its way back and we will be seeing its official return as early as next month.

As you recall, The Sharper Image filed for bankruptcy back in February. Too many people (like me) would walk into the shop, fiddle with the unique gadgetry and massage chairs, and then walk away empty handed. You can’t exactly have a successful store if everyone browses and no one buys. A few months later, it was revealed that Sharper Image would return as a virtual brand. That rumor has now come to fruition.

We are fully expecting the launch of The Sharper Image virtual brand next month at the Consumer Electronics Show (CES) in Las Vegas. At this gigantic trade show, we will see The Sharper Image shoved back into the marketplace by offering 20 new products. While we may still get some random items to tickle your curiosity bone, most of these products will try to be a little more practical this time around.

For example, we’ll be looking at “devices like iPod-integrated audio systems as opposed to the crazy expensive massaging chairs and tiny microwaves we have come to expect from them over the years.” Sounds like a good move, you know, selling products that people may actually buy. Look for the new The Sharper Image product line to hit major retailers in 2009.