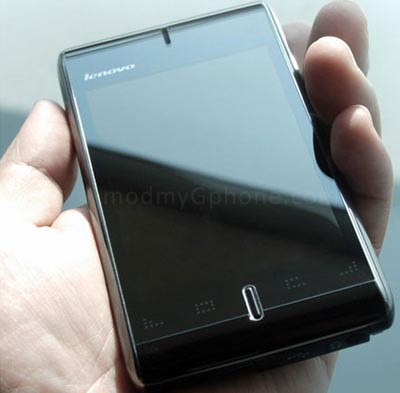 Just as the Apple iPhone ushered in a whole new era of touchscreen cell phones, it seems that the T-Mobile G1 is just the tip of the Google Android iceberg. The Open Handset Alliance is growing by the minute and we may soon be bombarded with an impressive onslaught of smartphones powered by Google Android. One of the latest handsets to emerge is a phone from Lenovo.

Pictured here is the Lenovo OPhone, an upcoming Google Android smartphone that boasts some of the most attractive styling cues this world has ever seen. Some people complain that the T-Mobile G1, which is really the HTC Dream G1, isn’t exactly the prettiest thing to look at. By contrast, the Lenovo OPhone (a codename) screams out that it is a classy device.

That’s the good news. The bad news, for anyone outside of China, is that the Lenovo OPhone with Google Android is being slated for release with China Mobile and China Mobile only. It will take advantage of China Mobile’s Open Mobile System, offering 3G in the form of TD SCDMA. The rest of the specs are left up to conjecture for now, but we can quite plainly see the extra large display and touch-sensitive controls below. We’re not sure if it will have a physical keyboard of any kind.

If the Lenovo OPhone is indicative of what we should expect from Android phones in the future, I’d say that Google’s open smartphone platform has quite the bright future ahead of it.