In most jurisdictions, it is illegal to watch a DVD in your car while driving. That’s why most monitors for DVD-watching are placed behind the driver’s shoulder. It’s also why in-dash DVD players, officially, shouldn’t be run while you are actually on the road. You should pull over and put the vehicle in park. That’s a problem for the person in the passenger seat, because they can get distracted all they like with videos.

Mercedes has created a rather creative solution to this issue in the form of the Splitview Command Display. In a nutshell, this single screen is able to provide two different images. One of these is angled toward the driver and the other toward the passenger. In this way, when the driver takes a look at the screen, he’ll see the GPS navigation, for example. When the passenger looks at the same screen, she’ll see Kung Fu Panda.

The Splitview Command Display system makes use of side-by-side pixel placement as well as a filtering mask, working in fundamentally the same way as lenticular printing. That’s essentially the technology that allows you to see several images on special hockey cards, giving you the impression of movement. It’s all about the angle.

As cool as this technology may be, there are two inherent problems. First, the driver will still be able to hear the audio feed from the DVD unless the passenger makes use of a set of headphones. Second, there really is nothing stopping the driver from leaning over toward the passenger to get a glimpse of their video content. And that’s probably even more distracting.

Anyhow, the new S-Class Mercedes models will be getting this Splitview Command display soon. 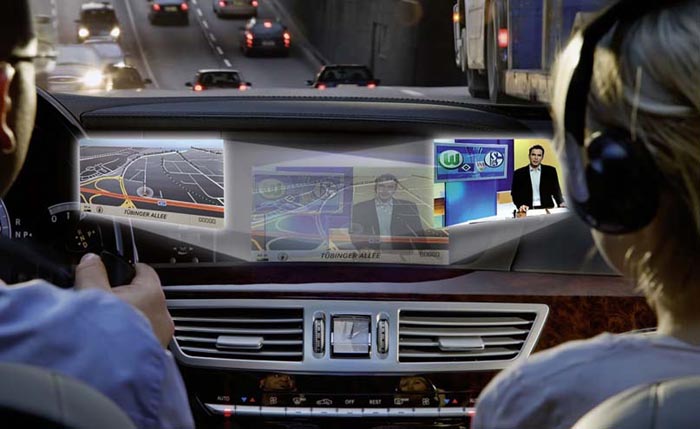