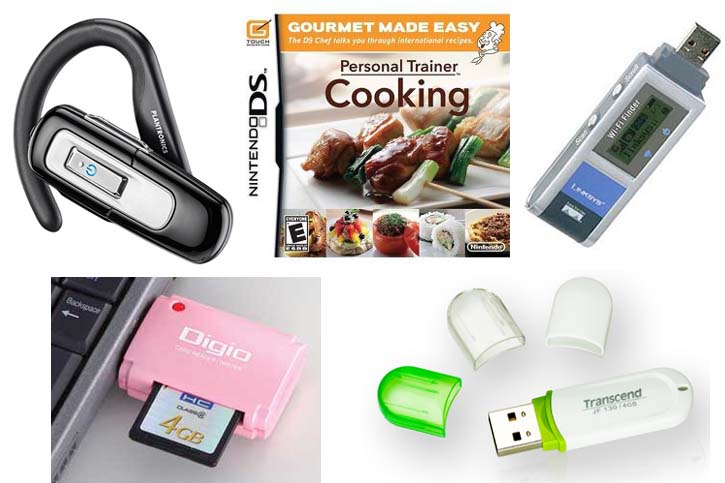 Times are getting tough for a lot of people, so it is getting increasingly difficult to find frugally-minded gifts for your friends and family. You still want to show your appreciation, but you don’t want to break the bank in the process. Seeing a massive credit card bill in January is the last thing that you’d want to see.

Thankfully, there are some pretty decent gift ideas that you can consider for the technologically-inclined person in your life and none of these will cost much more than how much you’d spend on dinner at a family restaurant. If you can afford a plate of pasta, you can afford to give these gifts. They may be a little generic, but with proper positioning and a touch of thought, they could come off a lot better than many gifts that cost a lot more.

In California, it is now illegal to talk on a handheld phone while driving, so there has been a significant increase in demand for hands-free devices. Some cars already come with Bluetooth integration, but a lot of them don’t. If you’ve got a busybody on your holiday shopping list and you know that this person is on the road quite a bit, nabbing an inexpensive Bluetooth headset could be just the ticket.

Yes, I know that it is easy to blow over $100 on something like the Aliph Jawbone, but a less expensive model will do just fine. It’s also not necessary to get the latest and greatest, so keep an eye out for Bluetooth headsets that have been out for a year or two. You may be able to find a pretty decent bargain on them. For example, the Plantronics Explorer 220

can be found for about thirty bucks.

Video games are incredibly mainstream these days. Just about everyone seems to want a Nintendo Wii and retailers are having a helluva time trying to keep Guitar Hero World Tour in stock. In like manner, the Nintendo DS Lite is popular with people of all ages. Unlike the major home consoles where a single title will run you in the $50 to $60 range, DS titles are usually closer to the $30 range.

As strange as it may sound, one of the most popular titles on the DS today is Personal Training: Cooking

. This is about as unconventional as it gets, because this isn’t even really a video game. Instead, it’s an interactive cookbook.

Instead of buying your mom a “dead tree edition” of a cookbook, why not consider something like Personal Training: Cooking instead. Browsing through the DS library, you’ll find tons of other possibilities, like Brain Age, Pokemon, Nintendogs, Metal Slug 7, and Ninjatown.

Wireless data, while getting more prevalent than ever, is still a little pricey for most folks, especially those who find themselves buckling down under a tighter budget. At the same time, netbooks like the Asus Eee PC are quickly rising in popularity and they’re not nearly as useful without access to the Internet.

It can be quite the pain to whip out and boot up that little laptop every time you think you may be able to surf, so why not invest in an inexpensive tool that detects Wi-Fi? Shaped much like a USB flash drive, these little units will tell you whether there is a Wi-Fi hotspot in the area and, depending on the model, it will also give you the SSID and level of encryption.

Some models, like the Linksys one shown below, can be a little pricey, but a little shopping around can reveal some Wi-Fi sniffers for $30 or less.

Believe it or not, cheap memory cards are not that bad. Just about everyone is bandying around town with a digital camera these days, so what better way to encourage your favorite shutterbug than to provide him or her with loads of shooting potential? Shot that squirrel… with a camera.

While you can certainly find some more expensive options, there are also SDHC memory cards that are remarkably inexpensive. I managed to find a Kingston 8GB Class 4 SDHC card for just twenty bucks. The store also had the 4GB card for ten dollars, if I wanted to go smaller and cheaper.

Just as SDHC memory cards are quickly diminishing in price, the same can be said about USB flash drives. Just about every store sells them and if you’ve got a little fashionista in your life, you can probably find a variety of USB thumb drives in a huge assortment of colors, shapes, and sizes to boot.

If you’ve got some extra money to blow, you can even upgrade into the 16GB, 32GB, or 64GB range, but getting something with 4GB or 8GB is probably the best value proposition. They can make great gifts for students and young professionals alike. Everyone needs to transfer some data.