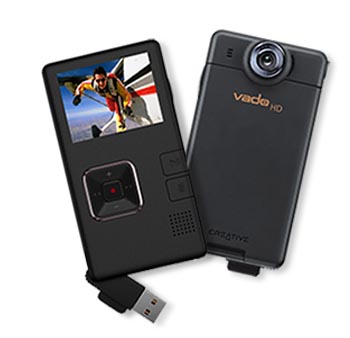 They say that a picture is worth a thousand words, but if a video essentially consists of thirty pictures every second, how many words is that worth? What if the video is in incredible 720p high-definition?

That’s exactly what you will be able to get with the newly announced Creative Vado HD. Following in the HD trend pushed forward by similar pocket camcorders offered by Kodak and Pure Digital, the Creative Vado HD takes on a form factor that is nearly identical to its non-HD predecessor.

No, it won’t be able to record your videos at 1080p, but the Creative Vado HD does come with a feature that you won’t find on any other HD pocket camcorder. In addition to the standard USB connector for uploading your videos to your computer (and to the new HD-upgraded YouTube), this thing comes with an HDMI port, effectively outputting 1080i video directly to your HDTV. That’s pretty sweet.

Rounding out the specs are the 2-inch LCD display, which appears to be 4:3 for some strange reason, and 8GB of internal memory. That’s enough to record up to two hours of HD video and much more SD video. Further competing against other similar devices in the marketplace, the Creative Vado HD is priced quite well at just $199 with free shipping from Amazon.com and directly from Creative.