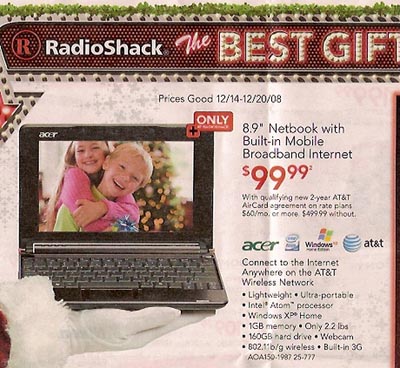 Even though netbooks are typically cheaper than their larger notebook counterparts, you may not feel inclined to spend three or four hundred dollars on one. What if you could get an Aspire One for just $99.99? Well, you could be in for a world of a deal starting next week.

A leaked flyer from Radio Shack seems to reveal an Acer Aspire One netbook for just $99.99. For a penny shy of a hundred bucks, you could be surfing the web anywhere you happen to find a Wi-Fi connection. Surviving Christmas dinner at your aunt’s house just may be a little less painful, since you can now watch your YouTube videos and update your Facebook status at will.

Well, you knew that there had to be a catch. After all, if everyone else is selling the same Acer Aspire One for $499.99, how can Radio Shack afford to sell it to you for $400 less? Well, in order to get the little lappie for under a hundred dollars, you’ll need to sign a qualifying 2-year AT&T AirCard service agreement involving a rate plan of $60/month or more.

If you plan on getting some AirCard service anyhow, nabbing this subsidized netbook might be a pretty good deal. If you don’t intend on getting any cellular broadband to go with your travel companion, then this might not be quite as appealing. That said, I am glad to see that subsidized netbooks have officially (kind of) arrived in North America.

On a somewhat related note, new netbooks may soon be boasting something better than integrated graphics, because NVIDIA is bringing the GeForce 9400m chipset to Atom-based netbooks. That’s the same graphics chip as that found on the new MacBooks.