This sneaky photograph has suddenly emerged on the Internet and no one seems to have any information about it. However, based on some of its main features, we’re willing to guess that this could be an innovative new handset from the people at Palm.

The single greatest reason why we’re led to believe that this is a Palm product is the QWERTY keyboard. It looks a lot like the one found on the Palm Centro, so this unnamed phone could very well be some sort of successor. Relative to the person’s hand in the picture, though, it seems that this phone is a touch bigger than the Centro.

I have to admit that this must be one of the more creative smartphone (?) form factors that I have seen. There are plenty of phones with large touchscreens and slide-out QWERTY keyboards, but very few take on the swivel or rotating form factor. By doing this, the phone offers a large landscape-oriented display while open, giving users an experience that is closer to a computer.

Continuing with this computer-minded theme, you will see what appears to be a trackpad underneath the keyboard, flanked on either side by what appear to be mouse buttons. Because of this inclusion, it’s possible that the display is not actually a touchscreen. That would be too bad and it would go against all the other Palm smartphones that we have seen in the past. The rounded corners, however, remind of a Helio Ocean. Hmm. Maybe this is a Pantech product instead.

Yeah, it might be a little awkward, but it’s very creative. Hopfully more information will emerge soon. 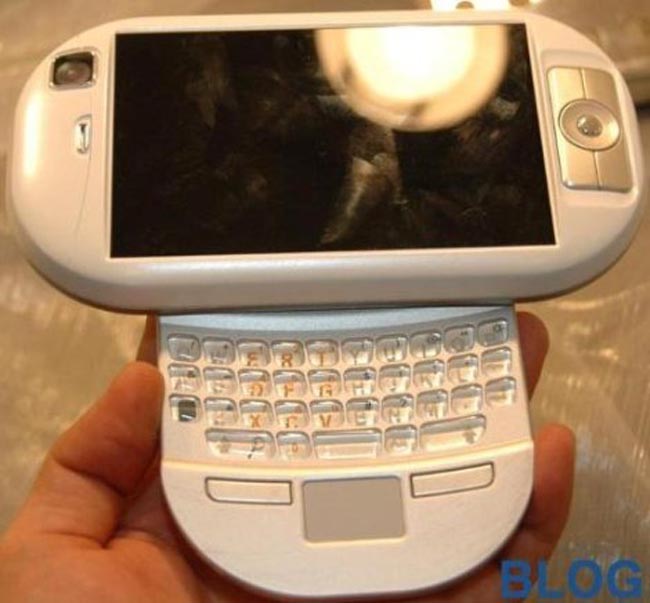