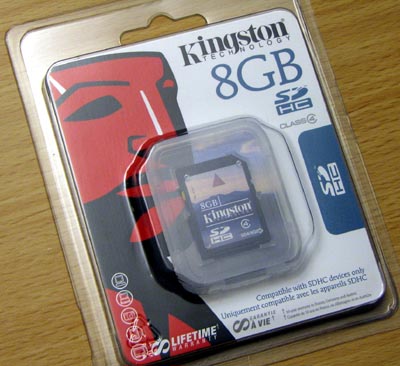 Seeing how just about everyone has a digital camera these days that rocks in excess of eight megapixels, we need so much more memory than we ever did before. This is further exacerbated by digital camcorders and even point-and-shoot cameras that are capable of recording HD video at 720p. Thankfully, memory cards also happen to be cheaper than ever.

Walking into just about any electronics store, you will have no problem finding a good assortment of SDHC memory cards for your digital cameras and digital camcorders, but some are so much more expensive than others. For people with more professional needs, they may feel more inclined to invest in a better card, because they need that kind of write and read speed, but what about the rest of us? Are the cheaper cards just as good for the average Joe?

To put this theory to the test, I picked up a Kingston 8GB SDHC Class 4 memory card

for around twenty bucks. By contrast, some of the more expensive 8GB SDHC cards in the exact same big box store were selling for as much as $80, none of which got beyond the Class 6 classification. I’ve used the Kingston card for a couple of days now and my initial impressions are that it’s just fine.

To be more specific, the memory card that I picked up was the Kingston SD4/8GBCR. The version that I got was assembled in Japan, though I know that some Kingston cards may be manufactured elsewhere. In any case, the card was instantly recognized by both my generic card reader and my Canon S3 IS digital camera

, even though the latter doesn’t explicitly have any official support for SDHC cards. The Kingston 8GB SDHC card easily kept pace with my admittedly poor burst mode and it could easily record the VGA 30fps videos as well.

As a Class 4 SDHC memory card, the Kingston card is supposed to guarantee a read/write speed of at least 4MB/sec. I put the card through HD Tune to see what sort of numbers came out and it easily surpassed this rating.

As you can see, it average 19.0MB/sec for its read speed. By comparison, I ran the same HD Tune benchmark on my ATP 4GB Class 6 SDHC card and it averaged about 19.8MB/sec. That’s a pretty minor difference for read speed. The effective write speeds were also quite comparable. Where they were not as comparable was price. The Kingston SDHC card retails for about $20, whereas its 8GB ATP counterpart has a going price closer to $70. These are both in Canadian dollars, but I’d imagine that American price differences would be similar.

Based on my terribly unscientific experiment, the difference between a cheap memory card and a more expensive one is pretty minimal at best. Note that I am comparing two rather well-known brands and the advertised speed difference is just between a Class 4 and a Class 6. I’m not so sure how a Class 2 SDHC card would compare, nor do I know how these two cards will hold up against one another over the long run.

With those caveats in mind, I don’t have any problem recommending that you save a big wad of money this holiday season and go with something like the Kingston SD4/8GBCR SDHC memory card

rather than a card that costs up to four times as much.