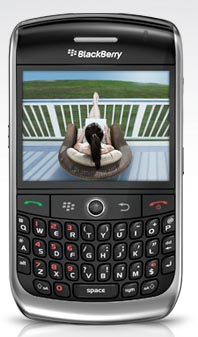 Are you a big fan of products by Research in Motion, but you’re not so excited about their latest touchscreen innovations? Rumors have been swirling around for far too long, but now Rogers Wireless in Canada has officially announced the availability of the BlackBerry 8900, a smartphone that you may have once known as the BlackBerry Javelin.

I’m not really sure how official they’re going with this, but most are saying that the BlackBerry 8900 is essentially the successor to the current Curve line of smartphones. Others are more inclined to refer to the Javelin as a smaller, peppier, and cheaper version of the BlackBerry Bold. It doesn’t have the leather back. It has a smaller speaker. And the phone itself is a fair grade smaller than the Bold as well.

Perhaps the most notable difference between the Bold and the Javelin is that the latter does not come with any 3G connectivity whatsoever. In this way, if you are heavy on the web surfing and other heavy data-centric services, you may be better off taking advantage of the 3G found in the Bold. You may also notice a performance drop due to the slower processor, but this (along with the lack of 3G) could help with battery life.

Interestingly, the BlackBerry 8900 is not completely a downgrade from the Bold, because it has a higher resolution display (480×360 vs 480×320) and a higher resolution camera (3.2MP vs 2.0MP). There are some tradeoffs, to be sure, but you would think that the Javelin would be cheaper than the Bold. It is, but not by much.

The BlackBerry 8900 Javelin is available now through Rogers for $179.99 with a qualifying three-year contract. I wonder if it’ll go to Fido when/if the pooch gets ‘Berry service again.