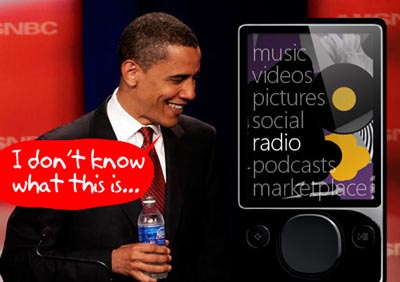 Political maneuvering extends far beyond the reaches of Washington. In fact, the Barack Obama PR machine extends all the way to Redmond, Washington and Cupertino, California, resulting in quite the little scandal even before Barack Obama officially takes the greatest office in the land.

Earlier this week, there was a story that Barack Obama was seen sporting a Microsoft Zune at the gym. Normally, the technological side of our politicians isn’t all that much of a concern, but there was a reason why this was noteworthy. Yes, we know Barack has a BlackBerry (that he’s not willing to give up just yet), but he also made it known that he uses a Mac as his primary computer. As such, if he wanted to sync the Zune with his Mac, he’d need to use Parallels, Boot Camp, or some other solution. We were overjoyed with his tech savviness.

Unfortunately for Microsoft fans across the country, it seems that the rogue reporter was mistaken. Barack Obama does not, in fact, own a Microsoft Zune. A spokesperson for the Obama’s public relations team spoke with the Wall Street Journal, saying that the “President-elect uses an iPod.”

I wonder if the Obama camp has any direct relationship with Steve Jobs and Apple, because they really seem adamant in telling us that the Barack uses a Mac and an iPod. It’s amazing how quickly they jumped into damage control when the news of the Zune broke out. Maybe I’m just reading too much into this and Barack is just as buddy-buddy with Bill Gates.

At the same time, the original writer for the Philadelphia City Paper is absolutely certain that it was, in fact, a Zune. In his own words, “I vividly remember Obama pulling out an MP3 player with his left hand while exercising on the machine. It had a dark case protecting it and from what I saw, he was using a Zune. I’ve seen a Zune in action. I know what it looks like.”

And so the controversy continues.