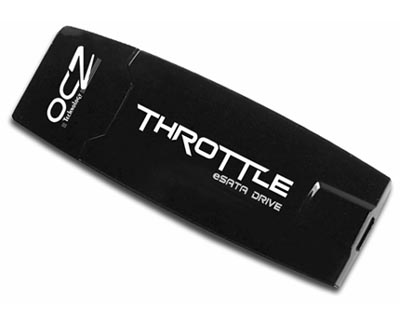 USB flash drives are incredibly convenient, because they can pack a lot of data into a very small package. It was unfathomable a few years ago to be able to carry 8GB, 16GB, or even 64GB in something that is about the same size as a ballpoint pen. The trouble as we reach higher capacities, however, is that we are still bottlenecked by the USB 2.0 connection. It’s not fast enough to keep up anymore.

In recognizing the USB 2.0 bottleneck that afflicts heavy data users, OCZ has come up with a new flash drive that makes use of an eSATA connection rather than a USB one. In this way, the OCZ Throttle can be accessed in a much more expedient fashion than its USB counterparts, reading data at speeds as high as 90MB per second.

Not surprisingly, the write speeds are a little slower than reading, but writing data to this drive is still very impressive at about 30MB/s. By comparison, something like the OCZ Rally 2 USB flash drive can only read at about 20MB/s and write at just under 10MB/s. That’s quite a bit of a difference, especially if you’re transferring 16 gigabytes of documents, photos, and videos.

According to OCZ, these impressive data transfer numbers make the OCZ Throttle eSATA drive capable of streaming full HD material right from the drive. You don’t even need to transfer the files over to your computer first. Oh, and in case you find yourself without access to eSATA, the Throttle also has a mini-USB interface as a “just in case” measure.

No pricing information has been announced just yet, but OCZ has indicated that the Throttle eSATA drive will ship in 8GB, 16GB, and 32GB flavors.