While most cell phone service providers are willing to sell you just about any mobile phone without forcing you to sign a contract, this was not the case when the Apple iPhone 3G arrived in Canada. In order to get your hands on the latest Cupertino hotness, you had to latch yourself down to a new three-year service agreement with either Rogers Wireless or Fido.

The three-year contract may have been a major hurdle for some people, but it seems that it just may be possible to pick up the iPhone 3G without having to sign a new agreement. How? We’ll have to take this with a great deal of hesitation, but on the Future Shop website last night, they were listing the iPhone 3G from Rogers with some rather interesting price points.

More specifically, FutureShop.ca had pages listing the 8GB iPhone 3G for $649.99 and the 16GB iPhone 3G for $749.99. Taking a look at these price points, you would have to assume that they are the price sans contract, considering that the with-contract price for these iPhones is $199 and $299, respectively.

Alas, some time after midnight last night, the pricier pages for the iPhone 3G magically vanished from the Future Shop website. The stores are still selling Apple’s touchscreen wonder, but they’re only doing with a contract with Fido or Rogers.

Should we be reading more into this or was it simply a slip-up by the guys who run the Future Shop website? I’m inclined to feel it’s the latter rather than the former, so I wouldn’t get my hopes up about an iPhone 3G out of contract just yet… unless you take the gray market route. 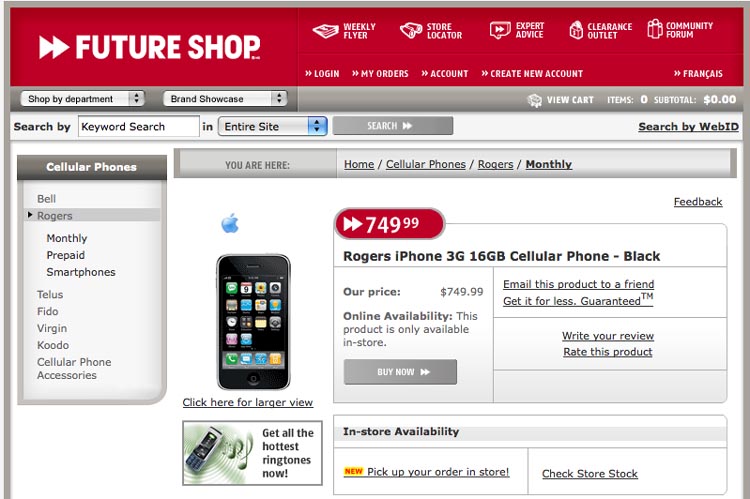