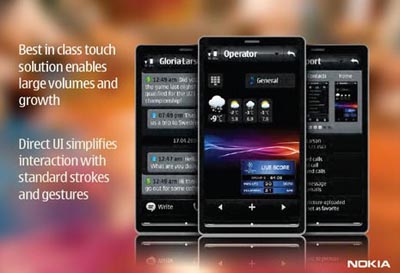 Cell phones aren’t just cell phones anymore. They’ve turned into so much more than that. Seeing how powerful some of these handsets have become, it would almost be fair to refer to some smartphones as mini-computers rather than just some mobile phone. Because of all this extra functionality and features that we are demanding, it is becoming more and more important to have the largest display possible.

It is partly because of our demand for a better mobile web surfing experience (among other things) that handsets like the iPhone 3G have become so popular. We like having that big display, because while it may not be as large as the widescreen LCD we have with our home computers, these screens are much better than the squint-worthy things we had to endure during the era of the RAZR and other similar handsets.

The question is, however, how much further can we go with stretching the size of the screen on a smartphone before it becomes more trouble than what it’s worth? As we inch (no pun intended) toward larger screens, smartphones may be start to infringe on the territory of MIDs, UMPCs, and even netbooks. If you’re satisfied with the web surfing on an iPhone or iPod touch, why would you lug around something as big as an Eee PC?

It’s not like Apple is the only one doing this, of course. We see a variety of handsets from such notable names as Samsung (Omnia), LG (Vu), HTC (Touch Diamond), and more recently, even the boys at Nokia. The Nokia 5800 XpressMusic (“Tube”) is the first touchscreen phone from the company, but they didn’t stop there. They’ve got much higher end with the recently revealed Nokia N97 superphone. This thing’s got a 3.5-inch 640×360 touchscreen and a full QWERTY keyboard.

Not a fan of the keyboard and want what appears to be a bigger touchscreen for all your multimedia, web surfing, game playing, and productivity needs? A top secret Nokia touchscreen phone has apparently spilled its way onto the Internet and it is pictured above. This design is much closer to handsets like the iPhone, Samsung Omnia, and HTC Touch HD, because it’s got a huge screen and apparently no keyboard. You sacrifice the size of the physical buttons to make room for a bigger screen.

You can take this concept even further. The Nokia N97 has a 3.5-inch screen, as does the Apple iPhone 3G. Shifting into the territory of mobile Internet devices like the Nokia N810, you find displays in the 4.0 to 4.5-inch range. What if you could have something that size in a cell phone.

Perhaps you’re not so interested in all that added bulk, because there’s no way that a screen that size would fit in your pocket, right? Well, Industrial Technology Research Institute (ITRI) of Taiwan has apparently developed a display that may hit smartphones as early as next year. The kicker is that this thing measure a whopping five inches across the diagonal. That’s bigger than the standard MID, getting closer to UMPC and netbook territory.

How do they do this? The folding TFT-EPD display panel is not a solid piece. Instead, ITRI describes it as a panel that “combines a folding-top display with a bottom-sliding secondary.” Although it looks like there is distinct seam going through the middle, that’s actually just the software taskbar. It’s one fluid five-inch display.

I’m not entirely sure how that mechanism works, but if it does and the screen really does look that good, can you imagine what you’d be able to do your so-called “mobile phone.” This is almost as good as a netbook, except even more mobile.

How far can we take the size of a smartphone? If the dreamers behind Minority Report have their way, our smartphone screens will soon surround us with remarkable 360-degree interactive holograms. How’s that for big?