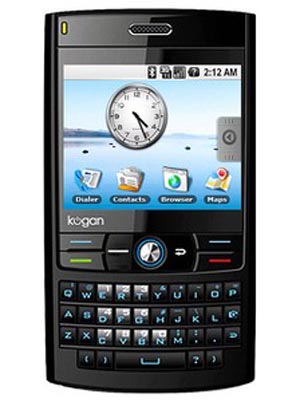 The first official Google Android phone is the HTC Dream G1, a handset which soon became known as the T-Mobile G1. As it stands, that’s the only major mobile phone widely available that runs on Google Android. As we look toward the next major Android offering, we’re not looking at a major manufacturer like Nokia or Motorola. Instead, we turn to a smaller firm called Kogan.

Never heard of Kogan? Me neither. In any case, what you see here is the all new Kogan Agora Pro, the next major Google Android smartphone. As you can quite plainly see, this phone takes on a distinctly different form factor from the T-Mobile G1. Seeing how Kogan is also based in Korea, it almost makes sense that it would borrow some style cues from Samsung and the BlackJack line. This style may be more suitable for business types, I’d think.

Set to launch in Australia on January 29, the Kogan Agora Pro will retail for a mere AU$399. For something a little cheaper, you can opt for the non-pro Kogan Agora that will sell for $299. The form factor and overall styling is the same, but the regular Agora lacks Wi-Fi and GPS. It still has 3G though. No word on when (and if) the Agora (or Agora Pro) will make it over to our side of the pond.