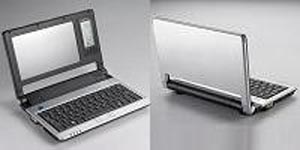 Many moons ago, we were teased with the possibility of a $100 laptop. It started out with Negroponte and his OLPC project, telling us that the little notebook for developing countries could be produced and sold at that magical sub-$100 price point. Unfortunately, when the OLPC XO Laptop finally came to be, it ended being twice that price. Not so good.

And then the first Asus Eee PC came along and the general public was treated to its first netbook, boasting a tiny seven-inch display and a tiny keyboard that cramped your hands. It was quite innovative, but it was nowhere near the $99 price point. These days, most netbooks fall into the $299 to $599 price range and that’s not all that cheap, especially when you can get budget notebooks (full-sized ones) for $500.

Well, if you’ve been thinking of joining the netbook phenomenon, but don’t want to spend loads of money, your prayers may soon be answered. As it turns out, the crazy kooks at Coby want to sell you a netbook for just $99.95. We call it a netbook, but other people are calling the Coby wonder a Midget PC.

There are going to be two versions of this sub-$100 netbook available. The PogetMate-7 and the PogetMat-9 will have 7-inch and 9-inch displays, respectively. Naturally, Coby went with Linux to keep costs low and I’d imagine that the performance will leave something to be desired. On the bright side, they’re less than $100. Look for the Coby Midget PCs to launch next March.