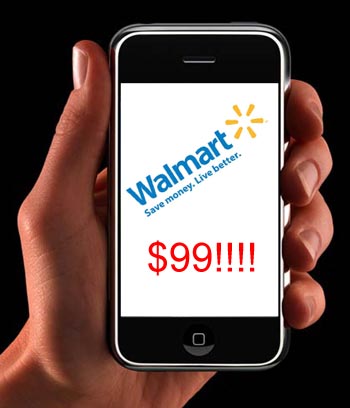 These rumors have been thrown around the Internet for far too long already, but it seems that we are getting closer and closer to the possibility of buying a brand new iPhone 3G for just $99. Yes, it may soon be possible.

More tidbits and non-confirmations are starting to surface, pointing toward the imminent launch of the Apple iPhone through Wal-Mart stores across the country. Seeing how Wal-Mart has no problem undercutting the MSRP on just about everything else in the store, it’s not all that unfathomable to see a cheaper iPhone being sold through there as well. They already cut a few bucks off iPods, so why not do the same to the iPhone.

Not surprisingly, you’ll still need to latch onto a two-year contract with AT&T to get the 4GB iPhone 3G at that price, but that’s to be expected. I’m thinking that Apple would have no problem getting those iPhones to Wal-Marts, because that’s one gigantic marketplace footprint to further push their wares. Wal-Mart is a huge national retailer, after all.

Oh, you didn’t catch that? Yes, the $99 iPhone 3G will be a four-gigger. That explains the $100 discount over the existing $199 iPhone 3G with 8GB and is in line with the $100 premium that you would pay to double the memory to 8GB. Many users don’t need 8-gigs and they’re willing to save $100 to sacrifice 4GB of space.

If Apple is willing to sell cheaper 4GB iPod nanos in “select markets”, it makes sense for them to consider cheaper 4GB iPhone 3Gs too.