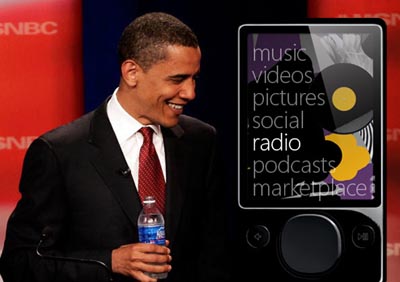 During his campaign, it became widely known that Barack Obama relied on a Mac as his primary computer rather than a Windows-based PC. That’s why it’s a little surprising to hear that he gets his portable music from a Microsoft Zune rather than an Apple iPod. You would think that as the new President-Elect that Obama would have a direct line to Steve Jobs, right?

As you may or may not know, the Microsoft Zune is not compatible with Mac OS X out of the box, so the only way that Barack would be able to synchronize his music library would be to run something like Boot Camp or Parallels on his Mac.

I guess this really shouldn’t be all that surprising though, seeing how Barack Obama is possibly the most tech-savvy United States President that we have ever seen. He’s the one that kicked off campaign strategies through YouTube and Twitter. He’s the one that opted for a Mac rather than a PC. And he’s the candidate for “change.”

Who would have known that “change” referred to getting a Mac to work with a Zune. He’s reaching across the aisle, so to speak, and implicitly encouraging Apple and Microsoft to work together? Maybe?

There are some rumors saying that Barack Obama actually bought the Zune for one of his daughters and she let the poor thing collect dust. Instead of letting it go to waste (Obama has green initiatives too), Barack picked it up and used it himself.