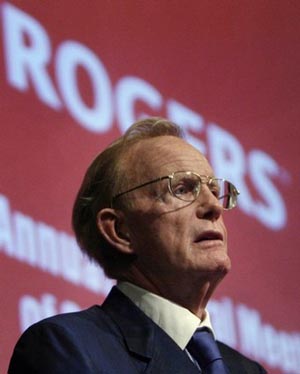 Of all the well-known businesspeople in Canada, perhaps one of the most visionary and ambitious had to be Ted Rogers, the founder and Chief Executive Officer of Rogers Communications. As I’m sure you already know, the Rogers family of companies encompasses all kinds of consumer and business services, including Rogers Wireless. And now Uncle Ted has died at the age of 75.

After Edward Samuel “Ted” Rogers, Jr. was admitted into the hospital in October, people grew increasingly concerned about his health and while they may not have wanted to do so, the company had to start making preparations for his departure. Ted Rogers suffered from congestive heart failure and he eventually died overnight on December 2 at his home in Toronto.

Yes, many people got upset with Ted Rogers and the direction he took with Rogers Wireless for the Canadian launch of the Apple iPhone and you don’t have to look much further than the many online forums to read people complaining, but it’s undeniable that Rogers was an absolute visionary, growing Rogers Communications into what it is today.

In terms of the future of Rogers Communications, Chairman Alan Horn was been serving as the acting CEO of the company and he will continue to do so. At this time, there are no future plans (that I am aware of) and I don’t foresee any major changes going down at Rogers (or Rogers Wireless) any time soon.