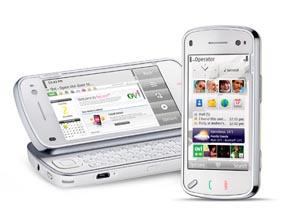 When we first caught glimpse of the Nokia 5800 XpressMusic “Tube” phone, we wondered why Nokia didn’t create a touchscreen N-series superphone instead. Well, now they have and it could be the best Nokia mobile created to date.

Over at Nokia World ’08 in Barcelona, the flagship Nokia N97 was revealed to the world. If you’ve been a fan of previous N-series multimedia phones but wanted a little more robustness when it came to messaging, this superphone will certainly fit the bill.

The form factor is very similar to something like the AT&T Tilt and the Sony Ericsson Xperia X1 in that the large touchscreen display slides away to reveal a full QWERTY keyboard, but the display actually boasts a 30-degree angle for greater visibility and ergonomics. Some product managers are calling this the “Facebook Phone”, but it’s so much more than a social media wizard.

Europe and Asia will get first dibs on this remarkable phone during the first half of next year, assuming that they’ll be willing to fork out the unsubsidized price of 550 Euro ($695). A North American version with NA-friendly 3G bands will follow “shortly after,” whatever that means.