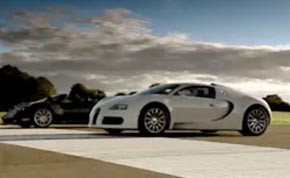 Sure, it might be interesting to see who would win a race between a Toyota Matrix and a Suzuki SX4, but isn’t it so much more interesting when you see a shootout between two cars that are clearly outside of your price range? That’s why we drool over the latest Ferraris and can’t get enough of the exotic Spykers.

The British blokes at Top Gear feel the same way, this time taking two of the fastest cars available out to their test track for some crazy high-speed action. In the featured clip below, James May takes the all new 650hp Pagani Zonda F Roadster out for the first time, fully enjoying the incredible power at his disposal.

The Zonda F is pretty sweet, but how does it compare against a million dollar sports car? That’s why the Top Gear guys also get to rip around the track in the Bugatti Veyron to boot. In case you’re not so familiar with Veyron, this incredible supercar gets its power from an 8.0L quad-turbocharged W16. Throwing it through the 7-speed Direct-Shift sequential manual gearbox, this hot ride boasts nearly 1000hp… but it weighs more than the Zonda.

So, which is the superior car? You’ll have to watch the clip to find out.