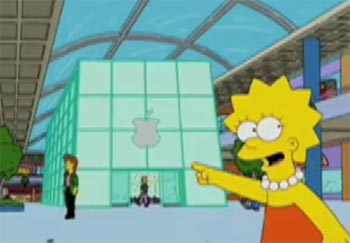 I’m actually kind of surprised that it has taken the writers at the Simpsons this long to rip into Steve Jobs and the whole Apple phenomenon, but they finally got around to it during last night’s episode.

As the episode opens, we see the Simpson family making their wall through Springfield Mall when Lisa spots the all new Mapple Store (Apple Store) located right in the center. The glass cube of a giant kiosk is pretty in touch with the Apple flagship store, but going inside, the parody only gets better.

Instead of the Genius Bar, we are offered a Brainiac Bar. Instead of iPods, we are shown a wide assortment of MyPods (MiPods?), not to mention the MiPhones and MiCubes. Home takes a look at a MiCube and notes that it is glowing. The Mapple Brainiac informs them exactly what that means.

Lisa wants to buy herself a MiPod but she finds that she can’t afford it, so she goes to the customer service rep to see if there is a more affordable option. There is, but it’s not exactly what she had in mind. The clip concludes with a special message from Steve Jobs Steve Mobs himself. You’d never guess what he does with every MiPhone… and what he does with Bill Gates at night. Shudder.