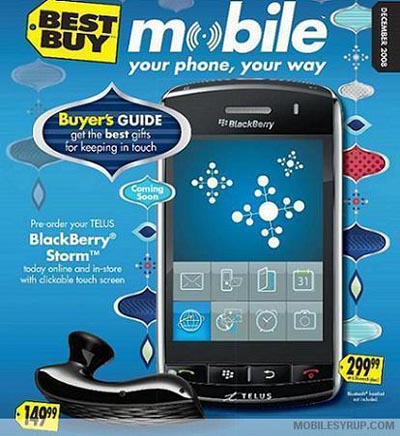 To my knowledge, Telus isn’t quite ready to shower the people of Canada with the BlackBerry Storm just yet, but that hasn’t stopped Best Buy from advertising the highly anticipated touchscreen smartphone. Further still, Best Buy has even attached some pricing to the Storm, despite having no official confirmation from Telus as to how much this thing should cost.

Yes, everyone wants to get their hands on the BlackBerry Storm just to see what all the hype is about, even though some early reviews of other versions (Verizon, Vodafone, etc.) have had a couple of mixed responses. Some people love the innovative touchscreen, whereas others aren’t so pleased about some of the operating system glitches and bugs.

In any case, as you can see through the provided image here, Best Buy wants to sell the Telus-branded BlackBerry Storm to you for $299.99 with a qualifying three-year contract. We’ve also noticed an outright price for $649.99, which is actually a little lower than the going gray market price on eBay for the Vodafone or Verizon versions.

Should we be buying into Best Buy’s pricing of the Telus BlackBerry Storm? Maybe, maybe not, but we’ll find out soon, because the touchy-feely smartphone is currently slated with an estimated release date of December 18. That’s less than three weeks away and RIM fanatics simply cannot wait.