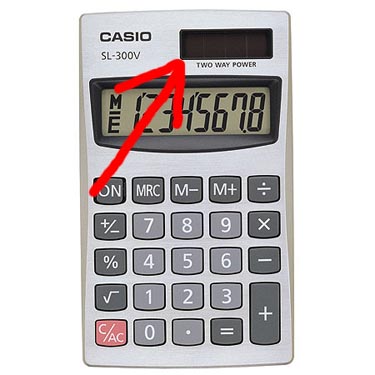 Thanks in part to guys like David Suzuki and Al Gore, environmental issues are getting a lot more attention these days than they used to get. This is a good thing, because we only have one planet and we have to learn to take better care of it. There are a number of different things that you can do to pitch in, like bringing a reusable cloth bag to the grocery store and riding your bike instead of hopping in the car. Our fascination with gadgets and technology can also go quite a bit greener.

Where there are accessories like the Solio Hybrid Charger on the market, I find it surprising that similar technology is not more widely used and integrated into many of the electronics that we use on a daily basis. Solar-powered calculators have been around for a very long time, but why aren’t solar-powered cell phones and other items more prevalent?

I can’t imagine that it would be a matter of cost. Going to my local dollar store, I find an abundance of solar-powered calculators that cost a buck. In this way, the solar panel (and the accompany technology to use the generated energy) cannot cost more than a dollar. Yes, I know that cell phones, portable game machines, and laptops use a lot more power than a simple calculator, but I’m sure a panel or two can help.

It’s very unlikely that a powerful smartphone like a BlackBerry or an iPhone can run exclusively on solar power, but it can certainly get a bit of a boost from the solar panel. If you’re going to wear the phone on your hip, place it on the dashboard of your car, or hold it up to your ear, you’re giving the handset an opportunity to soak up some of the sun’s rays.

There are some iPhone cases out there that have solar panels and I think this is a great idea, but wouldn’t it be better if the solar panel was integrated into the handset itself. Instead of that plain black or white plastic back, Apple could place a solar panel on there. The same can be said about smartphones from Samsung, Motorola, HTC… just about anyone.

And why stop there? All things portable have an opportunity to generate some “free” electricity by plopping in a solar panel. Take the Nintendo DS and DSi, for example. Instead of a plain outer flap, wouldn’t it be simply brilliant if the cover had an integrated solar panel? Even if this gives you an extra hour or two of battery life, that’s an extra hour or two that don’t need tethering to a wall outlet.

Also shown above is a solar laptop bag from Eclipse. The idea is that you can place your notebook PC into this bag, plug in the appropriate inner cable, and the outer solar panel will continually feed power to your laptop as you run between classes at school, dash through airport security, or just take your lunchtime stroll through town. You’re going to have that bag dangling next to your hip anyhow, so why not take advantage of the free sunshine?

We only have one Earth. It’s easy to turn our attention to automakers and tell them to create more fuel-efficient vehicles. It’s easy for us to turn to industry and tell them to get rid of those smokestacks. It’s easy to say that someone else needs to do something about it, but building a greener planet starts right at home. I just want electronics manufacturers to consider alternative sources of power that are more efficient. People want to go green, but they want it to be an easy transition.

You won’t even notice the big solar panel on the back of your MacBook, but Mother Earth will.